On Monday, August 21, the heavens were darkened in 14 US states. In the following, we explain to you why this happened and by which fascinating events it is accompanied.

What is a Solar Eclipse?

During a solar eclipse, the Moon is placed exactly between the sun and the Earth casting a large shadow on some regions. On Monday, 21st of August 2017, this was the case in the US when the moon fully occulted the sun. The rare event lasted one and a half hours in total and passed 14 US states – from West Coast to East Coast.

During the eclipse the corona shined like a ring around the moon fully covering the sun (totality). During totality, a up to a 200-km-wide core shadow was created. Something like this happens only during a total eclipse like the one on August 21. The next one with the same route will take place in 99 years.

To explore the whole eclipse as well as sun spots and the corona different telescopes from the NASA were in operation in Madras, Oregon and Casper, Wyoming. With a hydrogen light telescope, for example, the Exploratorium crew was able to observe the outer atmosphere of the sun. Moreover, a Lufft WS700 multi-parameter weather sensor was deployed in Madras to detect the weather parameters temperature, relative humidity, precipitation intensity, precipitation type, precipitation quantity, air pressure, wind direction, wind speed and radiation.

Fact 1: The weather during a solar eclipse changes noticeably

Lufft‘s weather sensor WS700 recorded, that it got cloudier and windier shortly before the eclipse started. The temperature dropped 4 °C (39 °F) due to light loss. The global radiation changed significantly with the beginning of the eclipse as reflected by the measurements of the WS700. The darkness was comparable with the time shortly before sunset. The whole process was like a change from daylight to twilight. As the moon moves in front of the sun, the sun shadow takes the same form as the current one of the solar eclipse. This gets clearly visible when holding a perforated plate in between the sun and the ground. The special shadow looked even sharper on the ground so it was possible to see very fine shapes.

Fact 2: Solar eclipses don’t occur every month even the moon seems to take the same path

Fact 3: The sun is 400 times larger than the moon and however gets covered completely

Because of the various orbits, different types of eclipses occur: If the moon covers the sun only partially, it is called a partial solar eclipse. If the moon moves completely in front of the sun, but cannot cover it completey due to the large distance, it is an Annular Eclipse. Only in the case of a total solar eclipse, everything matches perfectly, so that the sun disappears completely for a few minutes, leaving only its corona.

Fact 4: During an eclipse, you can look into the future

Although the last total solar eclipse occurred around midday, stars were visible during the phase of totality – as at night. What is to be seen in the sky, however, is not the normal stellar constellation but one that will be seen in several months. On 21 August it corresponded to the constellation of February 2018.

Although the sun is 149,600,000 km away from the Earth, geomagnetic storms on the sun affect our magnetic field. This can even affect airplane or satellite communication or power grids.

The geo magnetic storms, also called prominences, are mostly much larger than the Earth. They consist of a loop of hot gas coming from deeper sun layers, such as 20,000 °F hot helium caused by solar magnetic activity. During the eclipse, these events get visible in form of sun spots.

As the moon is slowly distancing itself from the earth, the total solar eclipse will expire one day. In around 400 Million years the distance between the moon and the sun will be too far to fully cover the sun’s disk. Then, solar eclipses will only be a magical memory.

Learn more about this breathtaking event in the video of the Exploratorium in coorperation with NASA:

Learn more about the WS700 and other compact weather sensors: 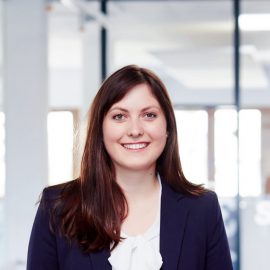 My name is Patricia Baur and at Lufft I’m responsible for the partner management in the sales regions APAC, China and India. This includes establishing new distribution partnerships and supporting existing partners. Before that, I gained international experiences during stays abroad for several years in China as well as Australia and completed my MBA studies in Management in parallel to my work at Lufft.