A smart city makes life easier for its inhabitants and administration. Whether it’s looking for parking spaces, waste disposal, irrigation or winter services – the pioneering municipality of Herrenberg is using data to perform many of its tasks more cleverly and efficiently than before. The intelligent winter road clearance service is based on sensors from Lufft.

The present can look pretty old. At least when it comes to how smart cities could function in a few years. The neat half-timbered houses in Herrenberg’s city center tend to remind passers-by of the past. But the 30,000-inhabitant community with its picturesque old town is becoming a pioneer for so-called smart cities nationwide.

There are many possible applications in a smart city and most of them do not sound like science fiction at all, but rather very practical. These include, for example, parking space sensors that show drivers the way to empty spaces, or intelligent garbage containers that automatically request that they be emptied when a certain level is reached.

In order that garbage cans, streets, flower beds and other things provide information about their condition, they must be equipped with sensors and connected to a radio network. Communication in this Internet of Things (IoT) takes place via low-radiation communication networks, so-called Low Power Wide Area Networks (LPWAN). In contrast to WLAN or mobile telephony, the performance of LPWAN is very low; after all, it only has to transmit small amounts of data instead of pictures or videos.

In Herrenberg, data transfer is done via the Long Range Wide Area Network (LoRaWAN), a form of LPWAN particularly well suited for smart city applications. Because it uses license-free frequencies in the ISM band (Industrial, Scientific, and Medical Band – 863 to 870 MHz), the municipality has set up a comprehensive data architecture with very low investment costs.

This data architecture basically consists of two sections. Sensors and data receivers, so-called gateways, communicate via LoRaWAN. The gateways are distributed over the city area at locations as high as possible to guarantee good network coverage. A city like Herrenberg with 30,000 inhabitants can manage that with just over a dozen gateways, and in 2018 only two of the receivers were used. These are connected via the Internet to servers from which computers can retrieve the data for various applications.

A wealth of data for everyone

What’s exciting about the whole thing is that the infrastructure is open to everyone, everyone can use it – and if necessary, expand it themselves. Nevertheless, the data is transmitted in encrypted form and can only be viewed by the respective user. This fits with the spirit of a “join-in city” that Herrenberg has proclaimed itself. We at mhascaro use the transmitted data from the sensors and have – in cooperation with the Office for Environment, Technology, Green, developed a platform with which their employees can monitor all sensors in a user-friendly and clear way and read out measured values and histories. Alarm e-mails can be sent individually, which, for example, appear in the employee’s mailbox when a certain level is reached.

A promising pilot project in Herrenberg is the automated winter service. Road sensors and weather stations provide real-time data, they are almost like a view of the road from a window. This is a great help for the winter road clearance staff, who have an enormous amount of work to do every season from November to March. Even in winters with little snow such as the last one, there can always be slippery frost or black ice. So, the more the winter road clearance service knows about the condition of the roads, the better – and safer.

Learning from the past

Two Lufft IRS31Pros are currently installed in the streets of Herrenberg, a third will follow soon. WS600 and WS800 weather stations provide information on temperature, humidity and pressure, wind speed and direction, solar radiation and precipitation. The integration into the LoRaWAN network was developed by mhascaro in close cooperation with Lufft and is in use since the end of 2018. The measuring instruments tell us something about the current state, what is now and what was before. But wouldn’t it be much more exciting to know what will be? 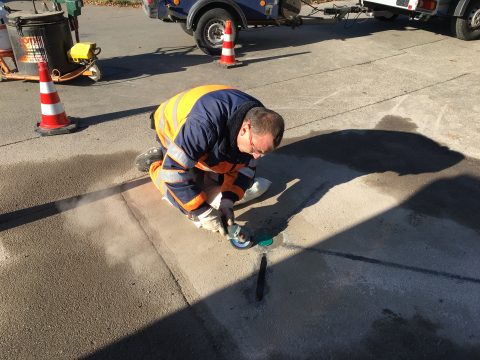 Seriously, there’s no crystal ball. Instead, artificial intelligence comes into play. Historical weather data, together with the clearing logs of the winter road clearance service, provide a valuable treasure trove of data from which an algorithm, i.e. a computer program, recognizes recurring patterns. This could be a correlation between humidity and temperature, for example, because dangerous slipperiness can form even without precipitation.

Safe driving even in winter

We have already started to feed the algorithm with information, but the larger the database, the more precise and universal its predictions. Therefore, the goal in Herrenberg is to include communities from all over Baden-Württemberg in the project. In this way, everyone can benefit from each other, relieve the winter road clearance services and make traffic safer in the wet and cold months. Not only in Herrenberg and the surrounding area, but also already in several other cities that want to make their operations more intelligent with the help of IoT and AI and become smart cities.

The Focus Group Digital Networking initiative has published numerous publications on its website about current and upcoming smart city projects in German cities. You can find an overview of its German and English publications here. 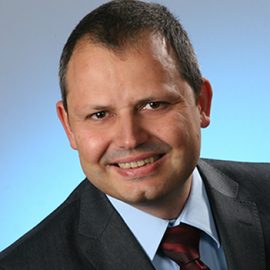 My name is Jerg Theurer. I have been working in the global IT industry for more than 30 years. For several years I have been focusing on the fast growing areas of IoT, data analysis and machine learning. I am founder of the company mhascaro GmbH, which is specialized in applications and solutions in the area of IoT and Smart-City.