Neumayer Station III, short Neumayer III of the German Alfred Wegener Institute (AWI) is the biggest as well as most important research station of the central Antarctica. It was named after the geophysicist Georg von Neumayer and is located at the Atka Bay on the 200 meter thick Ekström Ice Shelf. A few kilometers northern of it the superseded Neumayer Station II is placed.

The whole station’s construction took almost 10 years and started in October 1999. It had to undergo a conception phase, environmental impact study as well as a planning and construction phase. In February 2009, the station finally has started its operation which is planned to last for maximally 30 years in total. The station’s crew consists of researchers staying for one year mixed with visiting scientists staying for several weeks.

One of the mounted sensors is the Lufft SHM30 snow height sensor enlarging the knowledge about snow accumulation in the Antarctica enormously. By means of the snow height sensor, the researchers were able to find out, that the stationary snow heights are lowest between January and April, raising within the following months until August and accumulating in half November after a continuous snow ablation. This is followed by compaction and melting.

The related measurements you can look up at the scientific search engine of PANGEAA (open access library for earth & environmental science) where you find measurement data since January 2013. Under “Download dataset as tab-delimited text” you can download all data and at the link “View dataset as HTML” the first 2,000 rows are retrieved.

In addition, the website includes an internship report on the installed snow height sensor. It explains the periods of different snow height levels during one year as mentioned above and deals with the radiation influence on the snow heights.

According to Dr. Gert Koenig-Langlo, scientific leader of the meteorological observatories of the Antarctic station Neumayer, the SHM30 works very reliable and low-maintenance. The sensor was installed in form of a borrowed test model in 2009 and was purchased in 2011 along with another snow height sensor. Therefore even toughest conditions don’t influence the sensor’s functionality.

Last but not least, I recommend you a related documentary film in the local TV channel RBB Berlin-Brandenburg in 2011. It refers to the AWI’s work in the Arctica and gives nice insights and images you shouldn’t miss (in German only): At the Northern End of the World: With Polar Researchers on Spitsbergen, (C) RBB Online

Sensors in cold and storm: Wind measurements in the Antarctica 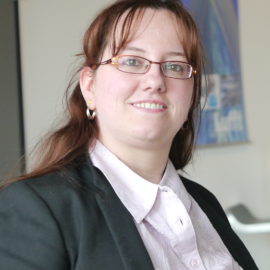 My name is Jessika Schugardt and at Lufft I’m responsible for the sales of our optical sensors SHM and CHM in the D-A-CH-countries. In addition, I look after the organization of our office in Berlin.

Sensors in cold and storm: Wind measurements in the Antarctica