Last winter, I was one of three salesmen who were on tour all over Germany to visit MARWIS prospects and to invite them to a live demo tour. We visited all the facilities responsible for clearing roads and runways, including construction companies, road maintenance depots and airports.

The feedback was consistently positive – the new technology was inspiring!

After several weeks of traveling from South Germany to the north, the MARWIS tour was slowly coming to an end.

I had already experienced a lot and met people from different regions, with different dialects and ways to give winter the cold shoulder. They all have one thing in common: They have a high responsibility and make our roads and runways safer for us in the earliest morning.

When I arrived in the North Germany, it was already March, and the mild winter was just as ending as my journey. I was about 700 km from home and my last destination was an airport.

And as it turned out, this should also be my most exciting appointment.

Before I was allowed to enter to the airport, I had to register. Arriving at the airport entrance, we went through the security gate – like a normal passenger. “Does MARWIS pass the safety test?” I wondered. But the security officers quickly realized that MARWIS was not a threat at all and let us pass.

At the other end of the gate, I briefly introduced the MARWIS to the airport manager and his team. After the theory, practice followed immediately.

We drove over the airport area parallel to the runway with MARWIS and scanned the surface below us. When checking the tour at the monitoring software ViewMondo, I was amazed by the image of tracking: a green-bluish track that winds over the airport terrain. We were fortunate that it was raining on this day and that in some places MARWIS recorded the water film.

Next week the third part of the MARWIS tour will start and I’m curious which interesting routes my colleagues will drive this time. Track it at ViewMondo.com, Name: MARWIS-Tour, Password: marwis2016. 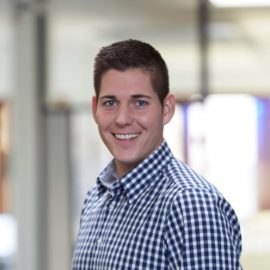 I'm responsible for the sales in South and East Germany at the Lufft subsidiary MICKS since 2015. Specialized on meteorological applications in the traffic sector, we help our customers to choose the right components out of a wide selection and to provide them with the best possible overall solution.