In fact, they have proven to be the most popular in recent years. Hydro power in its current form is the cheapest of the renewable energies. Wind power is the fastest growing.

However, there is a renewable energy that is far more versatile and has the potential to achieve a higher ROI than the ones mentioned above. It is an energy supplier we all see and feel every day: The sun.

While both wind and hydro power cover a wide range of needs, solar energy has the potential to change our lives in far-reaching ways.

But how do we use this change and how will it change our lives?

What are Solar Cells? How Do They Work?

Solar systems convert the enormous, inexhaustible power of the sun into electricity. Solar cells, also known as photovoltaic cells, are the tools to carry out this conversion.

Many of us imagine solar energy as large-scale systems in the desert or the smaller, dark-colored solar roofs on residential houses and office buildings.

Solar cells absorb sunlight, attracted by the dark, anti-reflective coating of the cells. At the moment, no solar cell can process 100% of the sun’s rays. This is also the greatest limitation that researchers are currently working hard to improve.

The sun light penetrates the solar cell, which consists of two layers of semiconductors with opposite charges. These absorb the light and convert it into electric current.

Each cell is designed to generate only a certain amount of electricity and due to the absorption rate it is typically a small output, which is why most solar systems have many interconnected cells. These interconnected modules all together deliver the power directly to the area where it’s needed.

The performance of the cells and the electricity they generate depend on several conditions:

As one would expect, the longer a solar cell is exposed to intense, direct sunlight the more electricity it will generate.

Solar Power Vs. Other Renewable Energies

What sets solar energy apart from wind and hydro power is its versatility in both large and small projects.

For example, hydro power certainly makes sense when it comes to supplying a nearby power grid. However, it is limited to local resources and therefore quite inflexible. Wind energy also requires locations where the wind blows more or less evenly. A further disadvantage is the strong influence of large wind turbines on the landscape, which often leads to an outcry from local residents. Hydro power requires the intervention in nature and often also the diversion of a water source.

Compared to that, solar energy offers a much broader range of applications: The sun is available almost everywhere (except, of course, in the remotest places on earth). It is also the energy that has the least impact on the landscape and nature.

Solar cells as a stand-alone energy source can be attached to existing structures or integrated into materials. It can even be used in mobile applications, which is probably the greatest advantage.

Consider driving a car with all or at least a portion of the electronics powered by the sun. Or imagine camping and heating your tent through cells that are stitched into the fabric or charging a mobile device by plugging into the same tent. You could even charge your smartphone by merely plugging it into a jacket sewn with solar cells.

As the cost and innovation of solar cells become cheaper and more available, the following applications will only become more popular.

As the name suggests, this advanced form of the solar cell is largely transparent – not completely, as otherwise the light would be transmitted directly, but sufficient for numerous new applications. The researchers succeeded in developing a design including organic salts that absorbs enough UV and infrared light to convert solar radiation into energy.

While the use of energy-generating transparent surfaces immediately conjures up an image of large glazed towers or houses with windows extending from floor to ceiling, the practical use is not quite as large.

Imagine the screen of a tablet or smartphone with this type of solar cell. Or the windshield of a car. Transparent solar cells are therefore far more attractive than the typical dark-colored modules and have a much broader range of applications.

In most cases, solar modules are made of silicon, as this is the most effective material for converting solar radiation into energy. On average, a silicon cell converts about 19% of the received sunlight. A particularly effective example even achieved an efficiency of 27%.

Organic solar cells made of plastic and carbon, which have long been regarded as inefficient, are currently catching up on the market: In the past, carbon-based cells did not come close to silicon. Now they can compete with them with efficiencies between 15 and 25 %.

Since organic solar cell materials are flexible, lightweight and easy to handle, they can be used in a variety of applications. They can be applied, for example, in moving structures, in textiles or accessories, or in materials that require semi-transparent materials, such as windows.

Researchers have also achieved a breakthrough in solar cells from living organisms.

The genetically engineered cells are characterized by their ability to function even in low solar radiation. Although this type of solar cell technology is still in its infancy, it could represent an advance over existing technologies in the future.

The aim is not to replace existing materials for the generation of solar power, but to create a way to enable solar yields even in areas that receive less sunlight.

For a long time, solar energy was synonymous with large, dark panels that create a dazzling reflection in the midday sun.

MIT researchers have now succeeded in developing a solar cell that is so small and lightweight that it can be placed on a soap bubble without bursting it.

At this size, it is not difficult to imagine solar cells that can be sewn into clothing, integrated into the surface of a tablet or smartphone, or the body of a car.

In addition to these small-scale applications, the innovation could also prove viable for large structures. Instead of large roof panels, future buildings future could be covered with a modern solar cell facade that supplies the entire complex with electricity.

While at present the ultra-thin solar modules are not yet scalable enough for the mass market, this time will certainly come soon. Then, it will revolutionize the use of solar systems.

You read right – a roadway.

One of the main drawbacks of electric vehicles is the shorter range compared to a petrol engine and the need to charge it more often. The charging process also takes much longer than the normal refueling of a petrol engine.

One way to overcome these disadvantages is to supply electric cars with a constant source of energy. While some proposals include the installation of wireless charging points at traffic lights, there are other ideas on a much larger scale.

The testing of such solar power lines has taken place very scattered in places like China, France, the Netherlands and the USA. This shows that the innovation is meeting with global interest and will be used all over the world. While costs and output are still an obstacle, there are already some promising application attempts, such as the installation of the new technology on parking lots.

As mentioned earlier, most of us associate solar energy with the dark solar modules on rooftops of energy-conscious homeowners.

These are effective, but are not perceived as aesthetically pleasing by everyone: For some, they are elegant future technologies that have come true, for others they are not a pretty sight to behold. Fortunately, the design is adapting more and more to the design of house roofs.

Photovoltaic “shingles” conform to existing roofs and in some cases the roof can consist entirely of state-of-the-art solar panels. The advantages remain the same as with conventional panels:

…only the new version even comes in an appealing look.

With this innovation, there are many possibilities to match the aesthetics of almost every house, and to keep the costs of house construction too low – a real win-win situation.

Solar cells and solar energy in general are still in the development phase – with great potential for improvement. Soon the ultra-modern solar technologies mentioned will be part of everyday life.

Given the versatility associated with solar energy, such as solar cars or solar cells sewn into clothing, there is no doubt that this is the most promising of all the renewable energies.

You want to get in touch with us? 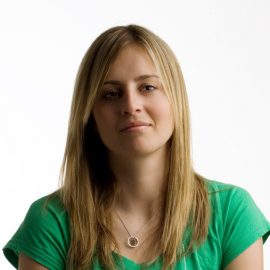 Anna Kucirkova works as a copywriter for over 4 years. She speaks 3 languages, loves traveling and has a passion for kids and writing. While she has been to many places in Europe and South East Asia, she still wants to explore the rest of the world.