After the first operating year of my weather station in Friedrichweiler, inaugurated in May 2013, it was clear to me that two important weather parameters were still missing. I wondered: Is a weather station without measuring the sunshine duration sufficient? And would an additional to ground frost sensor make sense? My decision was made: I wanted to expand the station!

Now, most people might assume that financing the expansion could be the biggest problem with such a project. But it wasn’t. The division into self-financing, a large donation by the GemeindeStrom Wadgassen GmbH and the support of the village community of Friedrichweiler to a third each, solved this problem quite quickly. After the second year, financing was essentially complete.

My plan after the fundraising: Search for, order, install and wire up a sunshine duration and ground frost sensor. The additional measured values should be integrated easily via the existing infrastructure.

But, I had reckoned without my host, because at this point a somewhat bumpy way had started. It should find a Happy End as late as after 5 years since the station’s start-up…

My inquiries to Lufft as a hardware provider, MeteoGroup as a measurement network operator and metrilog as a service provider for measurement data acquisition and their response slowly made me a weather technology expert.

Since my Lufft weather station in this form is unique in the MeteoGroup measuring network, I could not rely on any experience on the integration of the two additional sensors.

The SDI-12 protocol turned out to be a problem. Never heard of it? I haven’t either.

For direct integration into the existing communication unit, it would have been simplest if the desired sensors had been available in an SDI-12 variant.

Unfortunately, neither the Kipp&Zonen CSD3 nor the LTS 2000 natively supports the SDI-12 protocol. Only analogue output signals are supplied. Affordable and corresponding SDI-12 sensors from other manufacturers are not available on the market.

The CSD3 is a recognized sunshine duration reference sensor used by the German Meteorological Service DWD, as is the LTS 2000 for ground frost measurement.

To use these sensors in my system, hardware and software had to be developed to convert the sensors’ analog signals to the SDI-12 protocol and its specifications.

Fortunately, my internet research also led me to UP – Umweltanalytische Produkte GmbH in Cottbus.

In a first step, the company succeeded in putting the ground frost sensor into operation. But only with a 10-minute output rate, which was measured just at the time of retrieval.

However, in order to carry out a standard-compliant measurement, the values of the soil frost sensor data had to be recorded and buffered every second and the maximum, minimum and average values had to be recorded.

I faced similar challenges with the sunshine duration sensor CSD3 from Kipp&Zonen. The main task here was to record the sunshine every second according to the WMO (World Meteorological Organization) specifications.

The whole thing then had to be prepared for the SDI-12 protocol, so that the data could flow into the metrilog / MeteoGroup system.

Gerhard Kast, Managing Director of UP Umweltanalytische Produkte GmbH, reports on the hardware and software implementation:

“Indeed, the requirement to accumulate the sunshine duration as well as to record the temperature with the appropriate time resolution and to integrate it into the system via SDI12 signal was a greater challenge than initially thought. FabLab Cottbus e.V. supported me in developing a solution. Here I met Mr. Scholz, who found interest in the task and carried out the essential preparations. Dr. Thomas von Oepen accompanied the development steps and examined the results. The result is the “Sdurino” box in which the signals from the sunshine duration sensor, global radiation sensor and ground temperature sensor based on an Arduino microcontroller are converted into an SDI12 signal”.

This development took some months because the devil was in many details. On May 17, 2018 it should become serious: Since the remote commissioning did not work as desired, the developer of the so-called “Sdurino” box, Sebastian Scholz, travelled to Friedrichweiler to integrate the CSD3 and the ground frost sensor finally into my weather station system. For this, a few new solder connections, cabling as well as a modified software had to be installed.

This new possibility is a world exclusive development to integrate the sunshine duration sensor CSD3 from Kipp&Zonen into a technical environment in which the SDI-12 protocol is required.

I’m proud that the prototype is being used as a world premiere at the Friedrichweiler weather station!

Do you have questions? 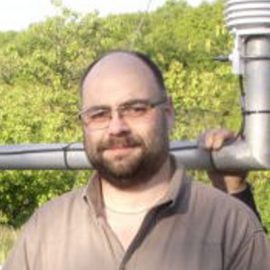 Alexander Burg is a passionate hobby meteorologist and operator of the Friedrichweiler weather station.