Airports around the world use Lufft technology because it’s flexible, comes with open protocols and easy to integrate into existing solutions. Moreover Lufft’s sensors are reliable under any weather conditions and maintenance-free.

Do you have any questions or do you need advice? 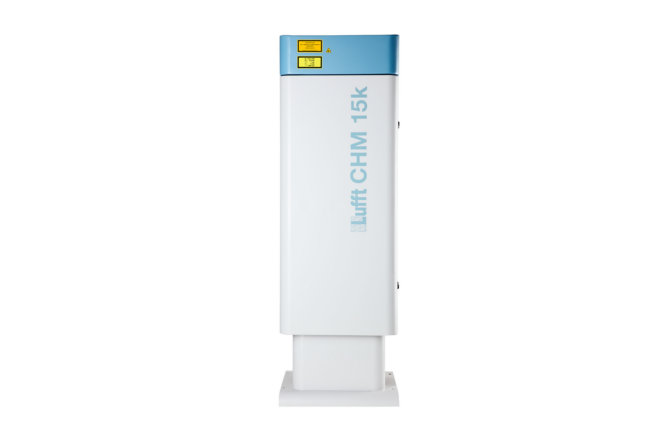 Exact results due to high sensitivity of the used lidar sensor technology! Reliable and accurate results at any time of the day or night are ensured by long-life laser sources, filters with narrow bandwidth and high-sensitivity photodetectors. 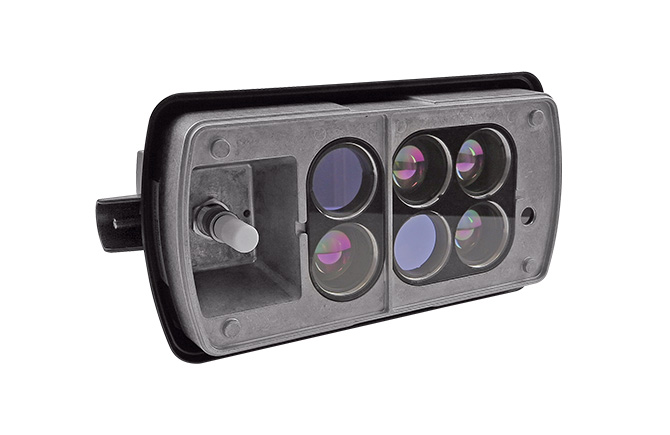 MARWIS is the first road and runway weather sensor detecting road conditions, temperatures, friction and other parameters mobile and in real time from driving vehicles...

MARWIS is the first road and runway weather sensor detecting road conditions, temperatures, friction and other parameters mobile in real time for vehicles. 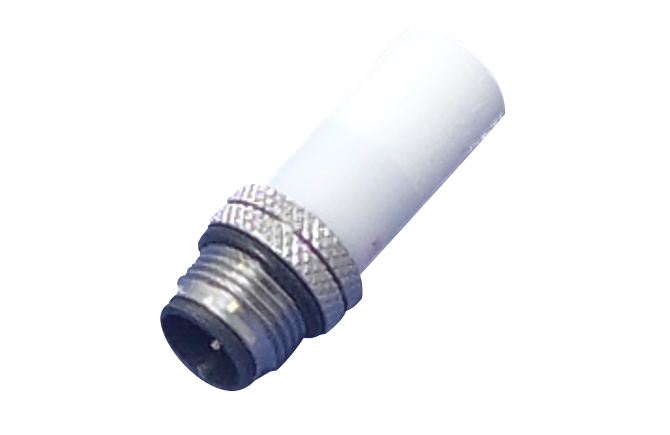 Detects the temperature as well as the relative humidity above the road surface and can be replaced easily. It is meant as spare part for both MARWIS as well as StaRWIS. In order to keep the temperature/humidity measurements precise it is recommended to replace it with a new one once a year. 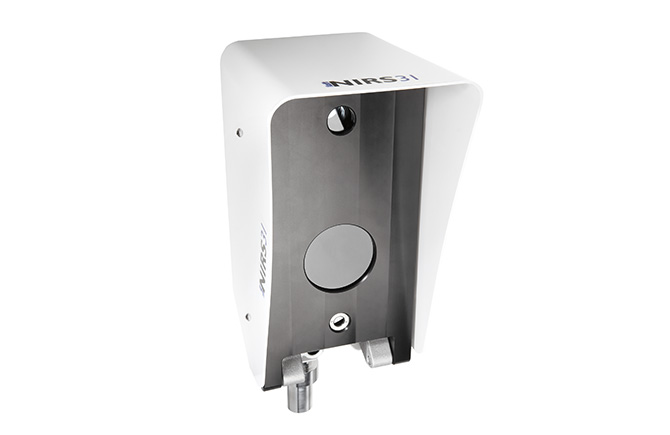 The NIRS31-UMB is a non-invasive road weather sensor with optical principle. It is mounted several meters above the ground and can even monitor bridges...

The NIRS31-UMB is a non-invasive road weather sensor with optical principle. It is mounted several meters above the ground and can even monitor bridges... 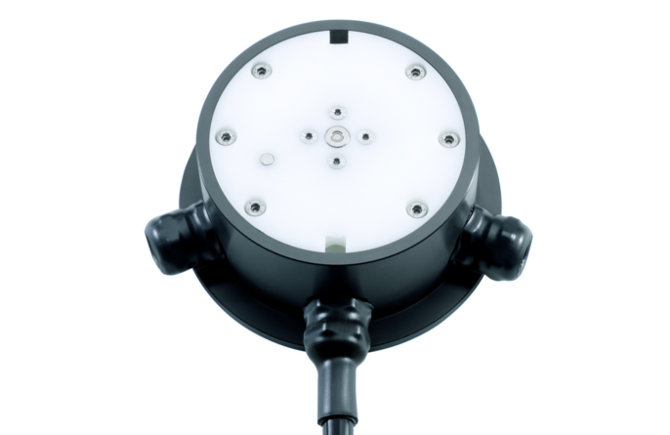 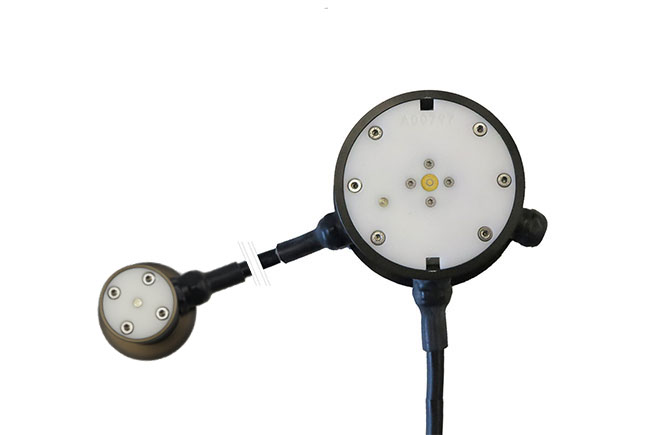 Detection of freezing temperatures independently from de-icing materials as well as road surface temperature with the embedded active road weather sensor ARS31Pro-UMB. Easy to maintain through its two parted housing… 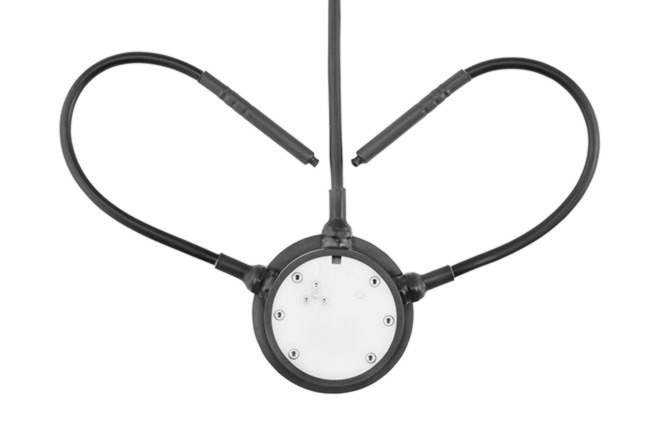 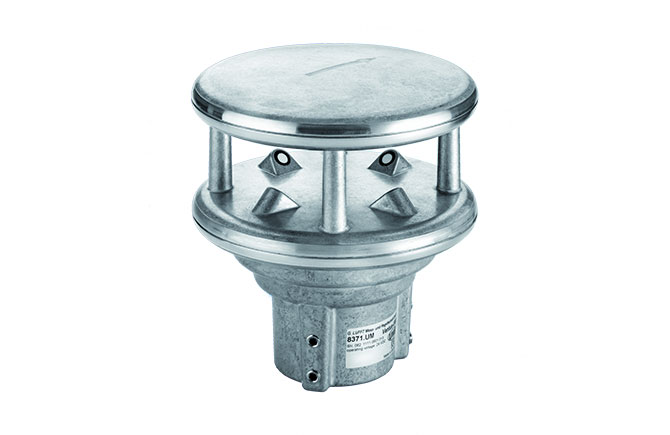 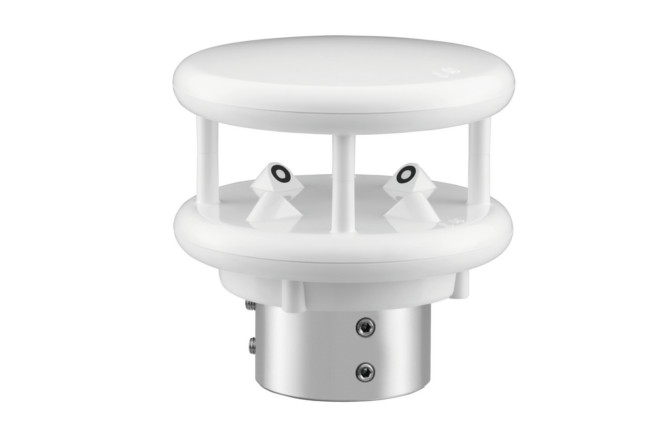 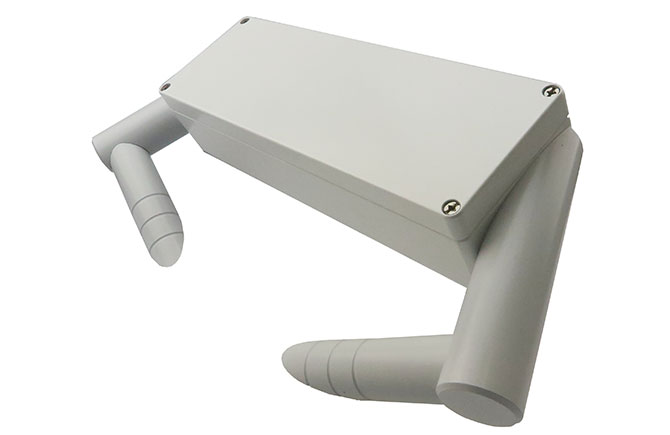 The VS20k visibility sensor measures visibility up to 20'000 m, ideal for road traffic applications on motorways, highways or bridges. Long life time is guaranteed thanks to the sea-water proof housing design. 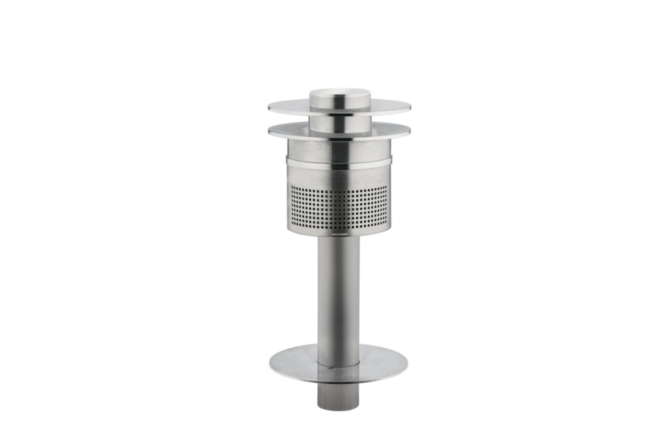 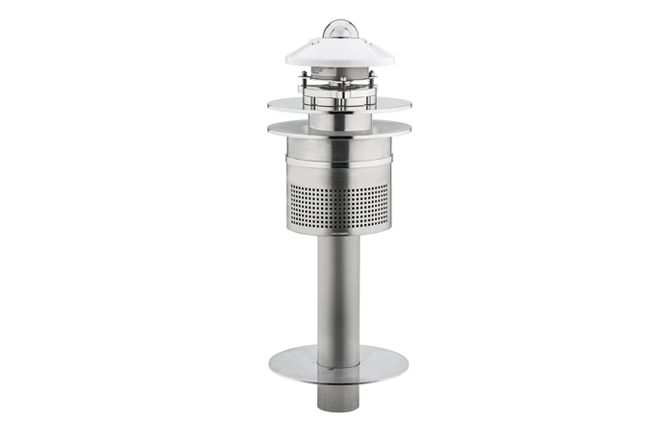 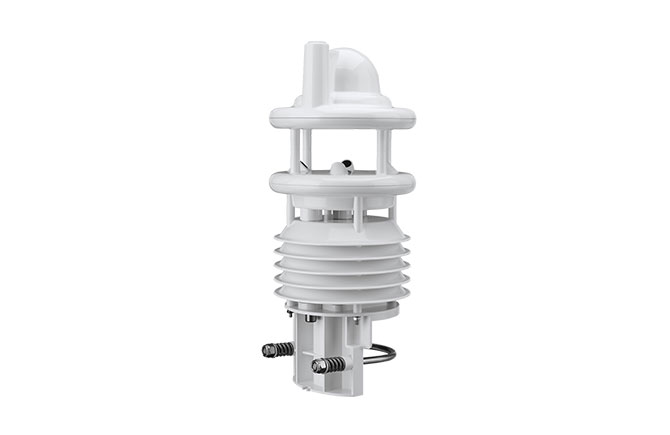 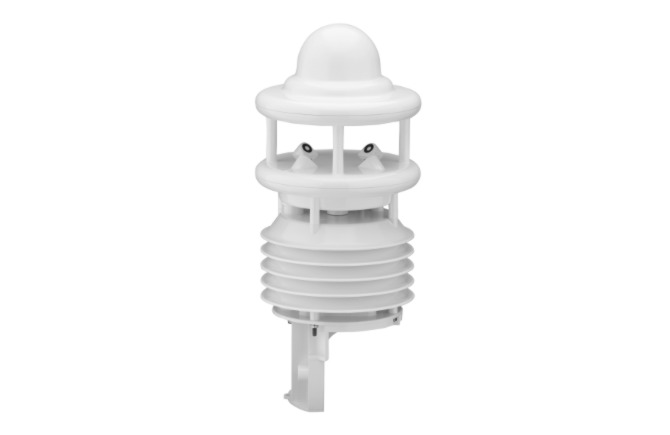 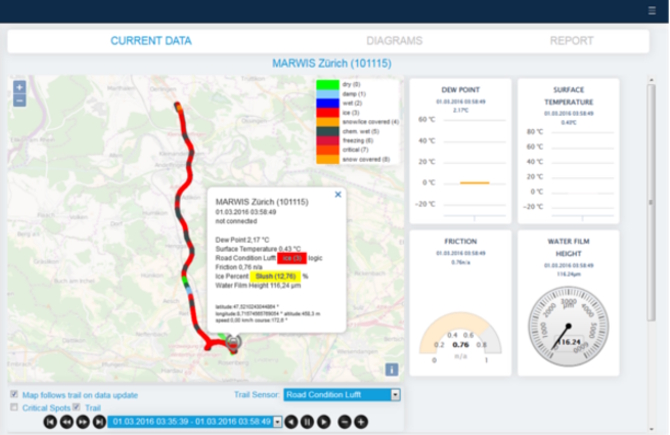 ViewMondo, the flexible Lufft Road & Runway Management Software, that collects different types of data, checks the data for plausibility and evaluates data and recommendation out of the data in according to your needs!

ViewMondo, the flexible Lufft Road & Runway Management Software, that collects different types of data, checks the data for plausibility and evaluates data and recommendation out of the data in according to your needs!

Recognized by the German Weather Service (DWD) the Lufft CHM 15k has been selected as the ceilometer of choice for their nationwide cloud monitoring network. Lufft ceilometers reliably detect various cloud heights, cloud amount and cloud cover and provide other essential parameters and index that informs the user of the Sky Condition, visibility and aerosol layers.

The ceilometer has a simple to use interface, and is designed to be a drop-in upgrade solution to any deployed ceilometer. With its open communication protocol, it can seamlessly be added to any existing ceilometer network.

The resolution is such that the ceilometer is able to detect volcanic ash particles, having a decisive influence on the air traffic. One extreme example was the eruption of the Eyjafjallajökull volcano in Iceland in 2010 paralyzing a huge part of the European air traffic for several days. Having a Lufft ceilometer network would have supported the routing efforts for air traffic personnel.

The Lufft CHM 15k is equipped with a one-wavelength backscatter LIDAR and stands out through its stable wavelengths, immunity against environmental influence factors such as fog, precipitation or temperature extremes, and its wide measurement range of 15km.

Moreover it is precise, rugged, eye-safe (1M classification), user-friendly as well as cooled or heated automatically. The window is kept clean by a window blower.

To the product page of the CHM 15k

The active freezing temperature sensor ARS31Pro-UMB was proven successfully by the BASt following the valid inspection rules of CEN/TS 15518-4:2013. The sensor is flush-mounted in the runway surface and measures the freezing temperature by means of active cooling and heating independently from the de-icing mixture. In addition, it measures the surface temperature. Its two-parted housing design allows the electronics unit to be separated from the casing for maintenance purposes at any time, in just a few minutes.

The latter also applies for the passive embedded road weather sensor IRS31Pro-UMB. Besides the freezing point for NaCl, MgCl and CaCl and the surface temperature, the IRS31Pro-UMB records water film heights of up to 4mm, road conditions (dry, damp, wet, ice or snow, residual salt, freezing water), ice percentages as well as friction. Optionally, it can be complemented with up to two different depth temperature sensors in 5cm or 30cm depths. They help to predict occurring surface freezing.

At airports the intelligent combination of the passive IRS31Pro-UMB and the active runway sensor ARS31Pro-UMB is necessary to be informative about the de-icing chemical. The ARS31Pro feeds the IRS31Pro with the freezing temperature, with which the de-icing-fluid concentration can be calculated.

With a measurement frequency of 100 times per second, the innovative MARWIS satisfies the requirements of a smooth movable and real time measurement device. The data can be viewed on a free iOS or Android app as well as remotely in the operation centre. This all-in-one sensor covers a big variety of weather parameters that include: dry, moist, wet, snow, ice, chemically and critically wet, temperatures, dew points, ice percentages, water film heights, relative humidity as well as friction.

To the overview of the Lufft runway condition sensors

Curious about risk reduction in Takeoff & Landing Performance Assessment (TALPA)?
Feel free to download our whitepaper and learn how you can improve both your security as well as your efficiency in TALPA with the help of new measurement technology MARWIS for runway surface weather detection.

In 2016 Lufft introduced an innovative weather sensor family exceeding all previous weather sensors in terms of precision. Measuring temperature, humidity and air pressure very precisely, the WS3000 is an indispensable component of an AWOS system.

The sensor forms part of the highly precise weather sensor family WS1000 and is the first multi-parameter sensor which can be dismantled completely. This is extraordinarily useful for maintenance and calibration purposes and turns the WS1000 family into a sustainable product line. Through an included WiFi-module, the data can be obtained wirelessly and comfortably. The measurement output can be accessed by industry standard open protocols.

A second, redundant pressure sensor can be included optionally to comply with any AWOS requirements. In addition we offer the WS3100, which has an additional CMP10 radiation sensor from Kipp&Zonen included.

Adding to solutions to monitor airspace and runway surface conditions, Lufft has been the first to develop all-in-one ambient weather sensors: The WS Family of sensors come with an open protocol digital interface, embedded aspirator and a weather-proof cable. The series ranges from a sensor that only measures wind to a model with eight integrated sensors to measure lightning, solar radiation, precipitation, wind, temperature, humidity, and pressure in one casing, connected with one cable, thus reducing installation, integration and maintenance time.

The VENTUS-UMB measures wind speed, wind direction and air pressure - extremely precise and maintenance-free. Furthermore, the Ventus calculates the acoustic virtual temperature. This ultrasonic wind sensor is designed without any mechanical parts, traditionally called “cups and vane“, removing the need of yearly recalibration The closed and rugged housing protects from external interference factors, such as birds or hail. All these features make the Lufft Ventus ideal for AWOS applications where reliability and performance is key in extreme environment applications.

More about the Weather Sensors for Airport Weather

Reduced visibility is associated with life-threatening risks that need to be prevented. In severe cases, national weather services, e.g. Met Office UK, deliver weather warnings sometimes prompting air traffic controllers to cancel flights. This was the case e.g. at Heathrow airport in January 2017, where 100 flights were cancelled due to dense fog and a visual range of 100 meters (328ft) only.

Which factors reduce visibility?
Firstly, mist or fog bears the blame. It consists of water droplets dispersed in the atmosphere. They are formed by the condensation of moist, saturated air. Secondly, particulate matter or smog as well as fine, stirred up sand are the reason for a reduced visibility.

How does a visual sensor work?
The Lufft sensor VS20k detects water droplets as well as aerosols using forward scattered light. The measurement instrument has a light emitting and a detection unit which are mounted opposite each other in a certain angle. Thus, the sensor only recognizes light scattered by fog or dust. Due to the high sensitivity of the sensor, especially the electronics, it can detect visual ranges between about 10 m and 20 km.

VS2k and VS20k – a strong new product family replaces former model
While the V2k, with its two-kilometer measuring range, is completely sufficient for road applications, the VS20k covers the needs of airports and meteorological services. These require a particularly large measuring range from below 50 meters to over 10 kilometers MOR (Meteorological Optical Range), according to ICAO (International Civil Aviation Organization) requirements.
Compared to the previous VS20, the new visibility sensors are a great improvement - in particular with regard to the new housing: It is sea water-resistant, anodized, specially coated and has the protection class IP66.
Thanks to a smart self-monitoring function, the sensor detects and reports lens contamination. In addition, the electronics automatically carries out zero point calibrations.
All these measures ensure a mostly maintenance-free operation over the whole lifetime. However, Lufft offers a suitable kit for on-site calibration.
With a RS-485 semi-duplex 2-wire as well as a SDI-12 interface, Lufft visibility sensors are equipped with several interfaces and can thus be easily integrated into any measurement network.

To the overview of the Lufft visibility sensors

Curious about most efficient ways in runway weather control? Watch our on demand webinar about the latest measurement technology for runway weather detection and how to apply this in your TALPA applications/workflows.